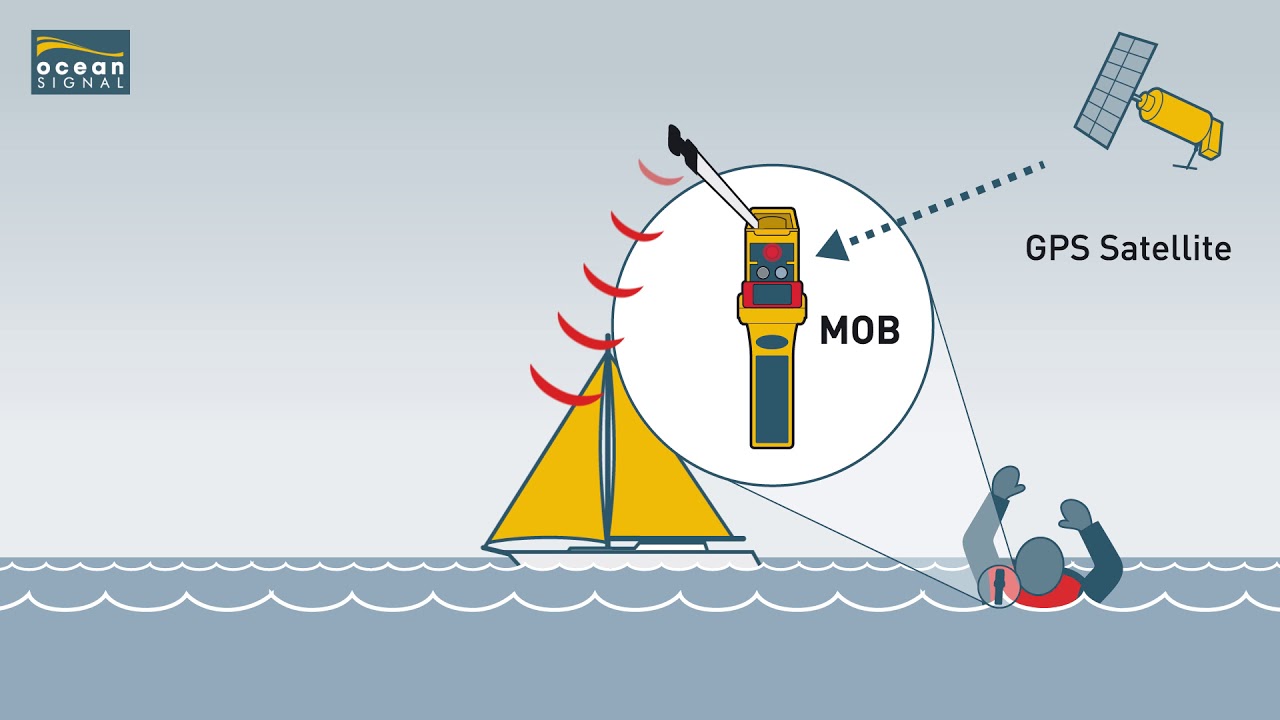 Introducing the world’s smallest AIS MOB device with integrated DSC – the rescueME MOB1 from Ocean Signal. The MOB1 is compatible with even the most compact inflatable life-jackets*.

The MOB1 is intended to be installed within the life-jacket* and will activate automatically on inflation, sending the first alert within 15 seconds.  The MOB1 is waterpoof to 10 metres.

The MOB1 communicates with the vessel you have been separated from and other vessels in the vicinity (up to 5 miles range dependent on conditions). To alert rescue authorities, an alternative product the rescueME PLB1 communicates directly via a dedicated search and rescue satellite network.

In an emergency rescueME MOB1 provides 2 methods of rapidly communicating your position, accurate to a few metres,  back to the vessel, plus providing visual indication via its built in strobe light.

The best chance of rapid rescue if you fall overboard comes from your own vessel. Your crew needs to be immediately aware of the incident and keep track of your position whilst recovery is carried out. Even in the most moderate of seas it is alarming how quickly a visual sighting of a man overboard can be lost.

Once activated your MOB1 will transmit an alert to all AIS receivers and AIS enabled plotters in the vicinity. The integrated GPS ensures precise location is sent to your vessel and any others that may be assisting.

An additional feature of the MOB1, is its ability to activate the DSC alarm on your vessels VHF, alerting your crew to the situation.

Compatibility: Most modern AIS plotters and DSC VHF comply with the standards required to receive MOB transmissions. It is however, especially if you are using older equipment, recommended that you check compatibility with the equipment manufacturer.  See the FAQs below for more information.

The MOB1 may be configured by the user to enter the vessels DSC MMSI number* by downloading the software at the link below.  The vessel’s DSC number may be programmed multiple times.

* DSC functionality is subject to regulations of country.
** Always refer to the manufacturer for specific instructions before installing this product directly to your life jacket.
*** Subject to warranty statement. (Note: When used in commercial applications the warranty period is restricted to two years.)

What test modes does the MOB1 have?

There are three test modes on the MOB1; Functional, DSC and AIS/GPS.

The Functional test should be carried out once a month and will display the length of time the battery has been used for.  It will also apply a load to the battery to test that the battery is not faulty or has been discharged.  It carries out other functional tests on the electronic circuitry.  It does not test the GPS or make test transmissions.

The DSC test should be carried out no more than two times a year.  This test sends a single DSC transmission to the MMSI programmed into the MOB1, which will be displayed on the vessels DSC radio.  It does not send a Distress or Distres Relay call and the call does not contain the position.

The AIS test should be carried out no more than three times a year.  This test activates the GPS receiver and after the position is determined it makes an AIS transmission, which will display on a suitable AIS receiver or chartplotter.  The received AIS message will show the position determined by the MOB1 GPS receiver.  There is also a transmission of the AIS text message containing the words “MOB TEST”.  Note that this test must be done with the MOB1 in full view of the sky.  Without a valid position, the MOB1 will not transmit any AIS messages.

The limitation on the number of tests a year is to ensure that the battery will still have its full operational life at the expiry date of the battery.

Why does my MOB1 show red flashes if I try to programme the MMSI number?

If the unit fails to programme, showing the flashing red LED on completion, please try again.  Turn the MOB1 on in programming mode again and retry.  There is no need to exit the programming screen on the programme.  If the programming page is showing, simply press F10 again to commence the programming sequence again.  Note that the red flashing may tecke several seconds to start after the on screen sequence has finished.

If you are having problems programming your MOB1, please check the following guidance.

1) Make sure that your screen brightness is set to maximum, using the controls on the monitor or device.

3) Ensure that the MOB1 is placed over the white square with the rubber programming adaptor firmly touching the screen and with the aperture in the rubber close to the centre of the white box.

4) Avoid programming the MOB1 in bright ambient light conditions.  If necessary point the screen away from direct or bright sources of light such as sun through a window.  (In extreme circumstances, especially with older screens that have lost their brightness, place a thick cloth over the screen and MOB1 to block out the ambient light.)

5) The MOB1 configuration software requires precise timing, which may be disrupted by other applications running at the same time, especially on slower computers.  If you still encounter problems, try shutting down all un-necessary applications, including anti-virus software.

6) On laptops, the F10 key will require using in conjunction with the Function (labelled Func or Fn) to start the white box flashing black and white to send the data to the MOB1.  Most keyboards will colour the F keys in the same colour as the Function key to identify this.

7) The MOB1 MMSI programming software is only available for Windows PCs.  For users of other operating systems and smart phones and tablets there is an online application available.  This can be accessed using the

button on the installers web page. Note that it can only be used online.

Which DSC radios are compatible with the MOB1?

Ocean Signal recommends using one of the radios from the list below with the rescueME MOB1. The following class D DSC radios have been tested in cooperation with the manufacturer and confirmed to receive the Individual Distress Relay call.

Standard Horizon:   The factory has confirmed the following models are compatible:

Class A DSC radios have always been able to receive this call and all models are believed to be compatible.

This list is not exhaustive and will be added to as more compatible models are confirmed.

Ocean Signal welcomes enquiries from other manufacturers wishing to have their radios listed here.

What DSC functions are allowed in my country?

The DSC functionality of the MOB1 is limited by regulations in each country.  The list below indicates which functions you may expect.

AIS + DSC Individual Distress Relay, All Ships Distress Alert, sent once on MOB1 activation and on manual initiation: Rest of the World.

How to programme DSC MMSI number into the MOB1

A video showing the programming sequence for the MOB1 can be found at this link..  Remember to set the display brightness to full before starting the sequence.
Note that the test key is being pressed directly and then the rubber adaptor fitted when the MOB is ready to programme.

Can I cange the DSC MMSI number is I move to a different vessel?

Yes, it is possible to reprogram the MMSI number used to call your DSC radio as many times as you like using the normal applications. There is no need to delete the old number first. The new number will simply overwrite the old MMSI number.
Each time you programme the MOB1 it will use a small amount of the battery capacity and reduce the operating lifetime by a few minutes each time.

Why does the displayed MMSI not change when I enter my DSC MMSI number?

All AIS and DSC MOBs are pre programmed at the time of manufacture with the self identification MMSI number.  In the case of the rescueME MOB1, or the M100, this number will always start 97260—-.  The 972 identities the device as an MOB device and the 60 identifies the device as manufactured by Ocean Signal.

It is not possible for the user to change this number, which is a requirement of the relevant approval standards.

What is the black cord supplied for?

The provided length of cord is supplied as a safeguard against accidental loss.  The cord (lanyard) should be used to tether the MOB1 to a fixed point on the lifejacket that will not inhibit inflation or detach/untie if the MOB1 is accidentally removed from its bracket. The MOB1 fixing point for the cord is located on the top of the unit.

Weight
92 grams
Standards
RTCM SC11901, EN303 098-1
⚠ WARNING:
This product can expose you to chemicals including Bisphenol A (BPA), which is known to the State of California to cause birth defects or other reproductive harm. For more information go to www.P65Warnings.ca.gov.

Manage Cookie Consent
To provide the best experiences, we use technologies like cookies to store and/or access device information. Consenting to these technologies will allow us to process data such as browsing behavior or unique IDs on this site.